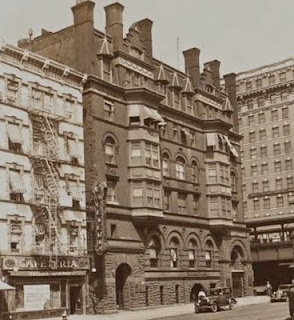 On March 23rd, The New York City Economic Development Corporation (EDC) issued a Request for Expressions of Interest to develop the historic Corn Exchange Bank Building, located on the northwest corner of 125th Street and Park Avenue in East Harlem.
Built in 1889 and acquired by the Corn Exchange Bank in 1913, the once grand symbol of Queen Anne and Romanesque-Revival style architecture was acquired by the City in the late 1970s.
Though the six-story building was designated a landmark in 1993, the City never saw fit to maintain the property and in 2003 sold it to local developer Ethel Bates.
After purchasing the greatly deteriorated building, Bates was unable to raise the necessary funds needed to realize her dream of developing a nonprofit culinary institute that would both serve and employ the Harlem community.
Though she sought to develop partnerships with other investors, Bates instead became embroiled in legal battles with developers who she said attempted to usurp her interests in the property. (She is now involved in a similar preservation / redevelopment campaign involving the 125th Street Victoria Theatre in Central Harlem.)
Bates was then regularly subjected to steep fines and the threat of repossession for numerous safety violations that resulted in several structural collapses (additional to those that occurred under the City’s possession). She often contested the charges, arguing that the city – through its benign neglect – was to blame for the hazard and that it should therefore be responsible for securing the structure and preserving the landmark facade.
When the City threatened to demolish the top floors in 2009, Bates and local preservationists led an unsuccessful campaign against the bulldozing and the building was then brought down to from six stories to two. 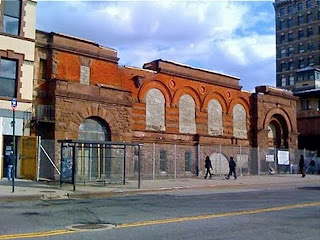 The case of the Corn Exchange Bank building is a classic example of the City’s carrot-and-stick approach to local planning and development and its overzealous bulldozing of neighborhood landmarks.
Rather than repossession (and, ultimately, sale to the high-bidder), neighborhood developers with insufficient resources should be supported rather than left to fend for themselves and get trapped in the maze of bureaucracy that always follows the City’s deceptive approach to “community-based” economic development projects.
It is incumbent on EDC to ensure that what’s left of the once-magnificent landmark be preserved and provide the necessary resources for community participation in its redevelopment.
Ethel Bates’ quirky and brilliant vision can and should be honored and realized. With proper support to local stakeholders, the area can be transformed back into the vibrant commercial square that the Corn Exchange Bank building once exemplified those many years ago.
For more information, see:
NYCEDC Seeks Developer For Corn Exchange Building in East Harlem Landmarked Corn Exchange Bank Building Could be RedevelopedLandmark Corn Exchange Building slated for redevelopmentNYCEDC: Request for Expressions of Interest Issued for Corn Exchange Bank Building