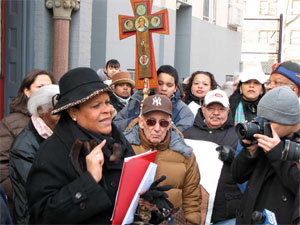 “God has set [Christians] in the world as His sentinels and they may not leave their posts.” — St. Justin Martyr

Despite recent arrests after a 37-hour vigil to protest the imminent closing of their spiritual “home away from home,” dozens of parishioners returned to Our Lady Queen of Angels Roman Catholic Church for their usual Sunday morning assembly.

Things were a bit different this time around, however, as the congregation could find no local priest willing to defy warnings issued by the Archdiocese of New York against officiating the February 18 ceremony. Still, church members and supporters braved cold weather and icy streets to gather before the now-shuttered church.

Led by Carmen Villegas, a parishioner for over 33 years, worshippers held a bilingual outdoor ceremony, chanting spiritual hymns and reciting biblical verses before half a dozens television cameras.

“We are going to keep fighting and we’re going to win,” declared the 52-year-old parish council member as supporters chanted “Save our church!”

Built in 1886 to serve German immigrants, the East 113th Street church has served hundred of thousands throughout its 121-year history.

Despite its having the only wheelchair ramp for elderly and disabled Catholic worshippers within 10 blocks, the 400-member parish is one of 21 churches targeted for closing by the Archdiocese of New York in response to a “shortage of priests,” “dwindling attendance,” and “demographic changes” throughout its jurisdiction.

According to the Archdiocese, the “parish realignment decisions” are the culmination of an extensive three-year planning process, established by Edward Cardinal Egan, “designed to identify the religious, spiritual, and education needs of the Catholic faithful throughout the entire Archdiocese, and determine how those needs could best be met. While the Realignment process has now concluded, the Archdiocese will continue the process of strategic planning for the spiritual good of God’s People and the strengthening of its parishes and institutions.”

Although the New York Daily News reported that none of the properties in the city parishes earmarked for closing are up for sale, many in East Harlem are not so sure.

East Harlem Chamber of Commerce President Henry Calderon was thus inspired to channel a gospel ballad “Calling All Angels” in his trumpet call to action.

“Cardinal Egan has decreed that some of his tax-exempt properties can no longer continue to save souls because they are losing dollars,” waxed Calderon in one of his oft-poetic emails. “When does a Church stop being a Church? Is it just a bookkeeping decision? Is the mission of our Church now found in a Business Plan, instead of in the Bible?”

After learning about the planned closing of their parish last year, active members of the church convened a working group, the Families of Our Lady Queen of Angels, chaired by Villegas.

The group then created a business plan outlining actions to prevent the closing, but their efforts were overruled by the Archdiocese. 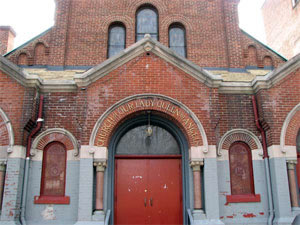 On February 9, the church door locks were changed. “We realized then, that they wanted to kick us out,” said Villegas.

She then asked for support from experienced groups such as the Council of Parishes and Voice of the Faithful, two Boston-based groups that have fought church closings in their area.

On Sunday, February 11, Villegas and several other parishioners and supporters, including Peter Borré, co-chairman of the Council of Parishes, decided to remain after mass in a peaceful vigil intended to prevent the closing of their beloved church.

The following afternoon, members of the group held a press conference outside of the church to reiterate their rationale. “We don’t want to disobey the church,” explained Villegas, “but we do want to be here to pray and worship where we feel comfortable.”

Rather than meet with the parishioners, the Archdiocese released a statement that read, in part, “As a result of this regrettable event and the possibility of future events of this kind. It has been decided that the parish is to be closed immediately.”

The tension grew worse when Monsignor Dennis Mathers, Vice Chancellor of the Archdiocese, arrived at the church with several burly, intimidating guards. Soon after, parishioners were ordered to leave Our Lady Queen of Angels or be arrested.

Unwilling to abandon their convictions, Ms. Villegas and five other parishioners – Gladys Mestre, Patricia Rodriguez, Alba-Delice Rijos, Juanita Ortiz, and Maria Mante – called on Councilwoman Melissa Mark-Viverito and officers from the 23rd Precinct for protection. They were then gently arrested on trespassing charges by local officers and politely led out of the church in handcuffs.

“We are deeply saddened by the arrest of Catholics by the Archdiocese of New York, who has failed in his pastoral duty,” wrote Villegas in a statement. “Vigils are a Catholic tradition going back many centuries, and it was disturbing to have this ancient tradition violated.”

A witness to the February 12 arrest, the Councilwoman says she was also disturbed at the “strong-arm tactics exhibited by agents hired and stationed at the church to intimidate and bully.”

In a February 16 letter, Mark-Viverito urged Cardinal Egan to meet with the parishioners to engage in a “good faith dialogue.”

“Our Lady Queen of Angels has served as a safe haven and a refuge for those willing to express their devotion and be consoled in times of grief and despair,” she wrote. “The vigil did not stem from defiance, but of deep love taught to them by their faith.”

“To have these individuals meet with such retaliatory and aggressive behavior by the institution to which they have been faithful appears to defy the very principles of Christianity they have been taught,” Mark-Viverito added.

The Archdiocese has yet to respond.

Villegas and others plan to bless parishioners with ashes this week on Ash Wednesday, February 21, from 6:00 pm to 8:00 pm, and vow to continue their Sunday morning assemblies.

The congregation also plans to work to preserve the church through landmarking and other legal measures with the support of Councilwoman Mark-Viverito and others.

Supporters are being encouraged to attend the arrestees’ Criminal Court hearing, scheduled for 9:30 am on Friday, April 20th at 346 Broadway.

Catholic Dissidence is Not New

Throughout its history, the Roman Catholic Church has faced many challenges from progressive rebels.

St. Jeanne d’Arc, was a young French soldier who fought to recover her homeland from English domination during the Hundred Years War. After a politically motivated mock trial in 1421, the 19-year-old heroine was convicted of heresy and burned at the stake when she said she’d been guided by “angels and saints from heaven.” In 1445, the Church relented and her conviction was overturned. Jeanne d’Arc was canonized in 1920.

In 1933, Dorothy Day and Peter Maurin established the Catholic Worker Movement, a spiritual organization that actively supports labor unions and human rights. Since its inception, members have often been jailed for acts of protest against racism, unfair labor practices, social injustice and war.

Today, Carmen Villegas and other East Harlem residents have passed a more modern test of faith and have taken religious militancy to an entirely new level: the simple preservation of an ordinary house of worship.