We’ve been waiting patiently to speak out about the city’s plan to Up-zone East Harlem, but we can’t because they haven’t actually presented one. Here’s what we’ve learned so far.
Almost $500,000 has been spent on the so-called “East Harlem Neighborhood Plan” initiative, yet community residents have mostly been surveyed about city services, quality of life issues, and their desire for more affordable housing (Duh!). After months of meetings, organizers are only now beginning to address local zoning. . Nothing too detailed, of course, because the city insists it has no specific plan and is waiting to hear from the community.

A Waste of Time and Taxpayer Dollars

The “East Harlem Neighborhood Plan” steering committee is largely made up of city employees and representatives of large institutions whose Executive Directors either do not live in this community and/or are not (for the most part) Black or Latino – the majority population in East Harlem. Publicly, steering committee members have aggressively encouraged a “take-what-you-can-get” approach and routinely dismissed questions and concerns from people they consider “anti-development.”

The steering committee has not adequately addressed East Harlem-specific rezoning in their presentations, surveys, or reports – and they have routinely failed to provide information in the language of the people who live here (aquí se habla Español).  We also don’t know how decisions are made at steering committee meetings because their minutes have not been made available.
Government employees and members of local organizations that rely heavily on the city for funding also make up the majority of attendees at the public sessions.
The entire process has been insincere and patronizing, at best.  How can the organizers make any objective claims when so many of the participants are in effect being paid or cajoled to be involved?
So, while we can’t address the specifics of the East Harlem up-zoning because we still don’t know exactly what’s coming (although we suspect it will be worse than this) we can, however, speak to the Mayor’s citywide rezoning plans: Zoning for Quality and Affordability (ZQA) and Mandatory Inclusionary Housing (MIH).
We are in effect being fed Bloomberg’s breadcrumbs: these are just a rehash of plans that were made by the prior administration in partnership with the real estate industry. The Mayor de Blasio’s plans are designed for middle-class families, which is less than 24% of East Harlem’s population. This is a low-income and working-class neighborhood. We need a plan that fits the needs of the people who live here now.

ZQA: If You Allow Them To Build It They Might Succumb

The argument for the Zoning for Quality and Affordability plan is that if you increase the allowable height of new buildings (by up to 31%), more affordable units will inevitably be built. How can we possibly expect any low-income housing will be built if the plan is not mandatory, or even necessary. The “affordability” requirement would only last up to 30 years, putting seniors at risk. Rear yards and other space between buildings would also be up for grabs, as would the current minimum unit-size of 400 square feet.

The Mandatory Inclusionary Housing plan won’t result in greater affordability either because it would only be applied in areas that allow large increases in market-rate housing developments – which we suspect is their end-goal for East Harlem. The fast-paced development of market-rate housing has proved to have a disastrous ripple effect as other landlords are incentivized to push tenants out to take advantage of rising rents. Williamsburg, Brooklyn and West Chelsea have seen the largest production of affordable housing in recent years. They are also two of the most rapidly gentrifying and unaffordable neighborhoods in NYC. This is a worldwide phenomenon, not a product of our imagination.
The federally mandated Area Median Household Income guidelines (AMI) used to determine “affordability” (currently set at $86,300 for a family of four), is clearly not reflective of the actual income of the people that live here now. “Take it up with Washington” is what many politicians say, but how exactly is that a tenant’s responsibly? Isn’t that what we pay them for – to represent?
In fact, East Harlem’s AMI is approximately $31,444, and considerably lower for African Americans and Latinos. Only 25% of East Harlem households earn 100% of AMI, 10% earn 80%, 10% earn 60%. The majority of us – 55% – earn 50% of AMI, or below. The Mayor’s plans would mostly benefit middle-income families.

The MIH plan would offer developers three choices for building market-rate and affordable housing: Option 1 would be 75% market-rate units and 25% at 60% AMI ($41,000-$51,780), while Option 2 would be 70/30 at 30% AMI ($59,000-$69,000). In “emerging markets,” such as East Harlem most likely, developers would be able to choose Option 3, which is 70/30 at 120% AMI ($82,920-$103,560).
Under the plan, developers would also be allowed to build segregated affordable units off-site and as far away as one-half mile or contribute to a  “payment-in-lieu” fund that would not be managed locally. MIH requirements could also be reduced or waived through a “hardship appeal” claim that the development is infeasible.
To ask East Harlem residents to support changes that would ultimately displace them is ridiculous!

Speaking Out of Both Sides of Their Mouths

There is a growing outrage over the Mayor’s plans. Community boards across the city have voted overwhelmingly against them.
The administration is now claiming that community board opinions do not really matter. Hold on! Wasn’t the “East Harlem Neighborhood Plan” initiative based on recommendations made by Community Board 11 in 2013 to up-zone the Park Avenue and Lexington Avenue corridor?
Two interesting side notes: East Harlem’s representative on the City Council Melissa Mark-Viverito was actively involved in the 2013 fight for more equitable Latino representation on Community Board 11. She actually first ran for office because her predecessor had removed a colleague from Community Board 11.

Other Pending Issues: Don’t Get Us Started…

There is also a citywide lawsuit contesting affordable housing lottery set-asides for local residents, which if overturned, would allow anyone to apply for affordable housing in East Harlem with no guarantee for local residents.
We’re not even addressing NYCHA’s “Next-Gen” spot-rezoning plan – another Bloomberg mandate which would allow market-rate developers to build on public housing playgrounds, lawns, and parking lots. And don’t get us started on the three luxury skyscrapers towers developers are trying to build on top of the East River Plaza mall, or the city’s massive 950-unit development project on East 125th Street that will demolish properties seized through eminent domain.
The reality is that members of the real estate board gave 10% of all campaign money in state elections. Those figures are likely to be higher for New York City elections. 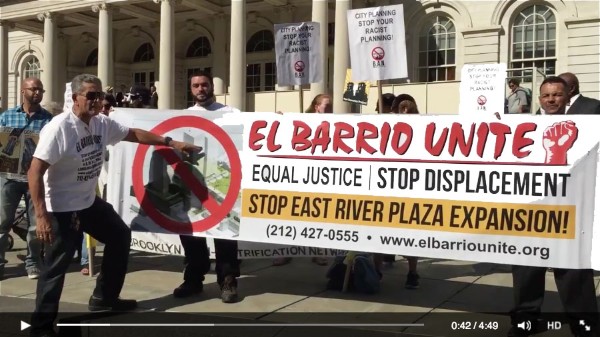 We are not here to offer alternative solutions (compromises) to the Mayor’s increasingly unpopular rezoning plans. That is why New York City pays its planners, lawyers, and bureaucrats hundreds of millions of dollars, correct? If after so many years in office our “representatives” don’t know – or won’t honor – what their constituents actually need, then perhaps they should resign.
East Harlem Preservation is unapologetically opposed to displacement – whether it is an affordable housing issue, the right to public assembly, or free access to public schools, community gardens, and city parkland. We understand the value of the people who live and work here now, and we support their right to stay. The Mayor’s rezoning plans will not afford them that opportunity.
It’s not a “done deal” as so many of the “East Harlem Neighborhood Plan” organizers and government reps would have us believe. We propose that people JUST SAY NO unconditionally and join the growing fightback movement here in East Harlem and across the city.