Rendering of a proposed $ 1 billion-dollar development being pushed by City Council Speaker Melissa Mark-Viverito who changed the scope of the project dramatically in 2013 to accommodate another project on 105th Street.

By Geoffrey Croft
NYC Park Advocates, June 25, 2017
The alienation of a public park to generate development rights is a circumvention of the Zoning Resolution’s regulations that preclude public parks from having development rights and would set a terrible precedent city-wide.
Despite this, the New York State legislature this week voted overwhelmingly to give Marx Brothers Playground to a private developer.
When rebuilt under the proposal, the playground would be in the shade for most of the day. The massive 1.1 million-square-foot project would encompass an entire city block.
This week, the New York State Senate voted 61-to-1 to support the $ 1 billion-dollar proposed development being pushed by NYC Council Speaker Melissa Mark-Viverito. The New York State Assembly voted 117-to-25 in favor.
The law creates zoning rights needed to develop the massive project, and authorizes the discontinuance of the use as parkland of land.
The plan would hand over the playground to a developer to build a massive 760-foot tower with 1,100 apartments, three non-Harlem Zone 4 schools, and retail space on the corner of 96th Street and 2nd Avenue—a project the community refers to as “The Wall.”
Since it is illegal to build on public parkland for non-park purposes and since parks do not have zoning, the City is attempting to get around this by having New York State legislators temporally seize (alienate) the park to allow development by creating commercial zoning.
Critics say this would set a very bad precedent, one that could open the floodgates and, at a minimum, allow the development of not only every single one of the approximately 250 Parks Department Jointly Operated Parks properties it shares with the DOE throughout the city, but ALL parks could be subjected to development if this proposed legislation is passed.
Upper East Side and East Harlem residents are fuming. At 760 feet the development would be the tallest building north of 60th Street and higher than any building in the other four boroughs—which area residents say would be egregiously out of context with the community.
New York State Senator Liz Kruger, who district abuts the proposed project, was the sole Senator to vote against the bill citing concerns about the precedent and had a number of unanswered questions.
State Senator José M. Serrano quietly introduced the bill. 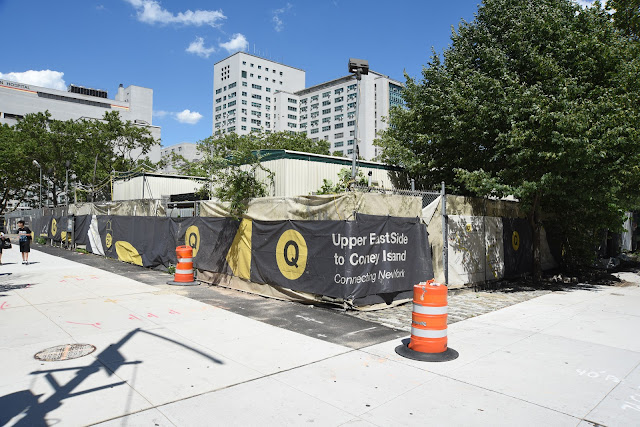 Marx Brothers Playground site – 96th Street and Second Avenue. The MTA is legally required to restore the playground after “temporarily” occupying 0.5 acres of the 1.5-acre park since 2007 as a staging area during Second Avenue Subway construction. The MTA paid $11 million to the Parks Department as mitigation for allowing it use. The Metropolitan Transportation Authority is expected to move out of the playground by September. (Photos: Geoffrey Croft/NYC Park Advocates)

The City enlisted Bronx Assembly member Michael Benedetto, who represents the North-East section of the Bronx, to carry it for the Assembly. He heads the State’s influential City Committee.
Benedetto was tapped after the bill’s original supporter Assemblyman Robert J. Rodriguez bowed out after having a conflict. Rodriguez is a Vice President at A.C. Advisory, a company that is involved in bond financing for ECF projects.
A.C. Advisory is listed as the financial advisor to New York City and related authorities in the placement of bonds.
The de Blasio administration had been lobbying heavily in Albany in support of the bill, according to several State officials.
New York State Assembly members who voted against the project were: Diti Barrett, Charles Barron, Kevin Cahill, Robert Carroll, William Colton, Carmen De La Rosa, Erik Dilan, Jeffery Dinowitz, David DiPietro, Patricia Fahy, Deborah Glick, Al Graf, Ellen Jaffee, Michael Miller, Walter Mosley, Moya, Yuh-Line Niou, Linda Rosenthal, Nily Rozic, Rebecca Seawright, Luis Sepulveda, Jo Anne Simon, Latrice Walker, Helene Weinstein, and Jaime Williams.
Assemblymen Dan Quart and Robert Rodriguez, who was originally supposed to sponsor the bill, did not vote.
Neighborhood residents are hoping that Governor Cuomo vetoes the irresponsible project.
The original 2012 plan involved the School of Cooperative Technical Education (Co-Op Tech), which is already on the block. According to the head of the Educational Construction Fund, the project changed dramatically in 2013 at the request of City Council Speaker Melissa Mark-Viverito—who insisted that three schools be built there..
According to ECF, the change would allow the Julia de Burgos Cultural Center—a long-time project of the Speaker’s—to expand. The center, located on Lexington Avenue and 105th Street, currently shares space with The Heritage School, one of the two “new” schools the Speaker is hoping to move to 96th Street.
The community is demanding that the playground be restored to its original location at 96th Street and 2nd Avenue, and a sensible plan be developed.
Related: City Seizing Public Parkland To Build Massive Tower Complex – Residents Furious
Reprinted with permission from NYC Park Advocates.